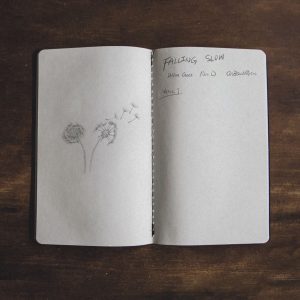 Success is measured in a variety of ways.

For an artist, it may be found in a number one song on the Billboard chart; it may be being recognized by a specific person or organization; it may be compiling a certain number of streams or amount of money.

In the case of Dillon Chase, the Oklahoma emcee has forged a career that has provided for his family while making music full-time. That stands out as a big win. With the release of his song Falling Slow (featuring Nic D and OnBeat Music), Chase has reached yet another highlight of what has been a successful career so far.

The crafting of a song is seemingly both similar and vastly different from artist to artist. The details are in the purpose.

“[I want listeners to find] courage to fight for the relationships that matter to God. Humility to own up to your mistakes.” – Dillon Chase

“One Sunday, after church, I heard the melody and wrote the verses in about 20 minutes. [That] is always a good sign because you know the inspiration is strong and it’s not forced.”

“I got hit with the lyrics because I always approach music from a very raw and personal space. The songs that come together the fastest are the ones I need to write. [They are] a way to process and organize my feelings about whatever I’m going through.

“The melody was all Nic D.”

“After a failed attempt at doing the chorus myself, I sent the track to OnBeat Music. That’s when he connected me with Nic D and pitched the song to him. OB worked on the arrangement and drums for the track. Nic D sent us a reference hook within a few hours!”

“Nic sent his files to OB, OB sent his production elements with Nic’s vocals over to me. I added some background vocals for texture and dynamics. OB gave some feedback on the first three mixes…by the fourth mix, we were all happy with it! It was mixed and mastered by me. OB got with Bway to finalize the artwork. All in all, the song came together in a couple of weeks.”

“I haven’t seen OB in over a year because of the border situation in Canada. It was bitter-sweet working together from a distance. We have so much chemistry in the studio together.”

“From a songwriting perspective, a commercial standpoint, this is the most relatable and accessible song I’ve put out.”

“For the first time, I was able to feel from a very personal experience, but write about it 10-steps back. It is more accessible to everyone.”

“I actually was super skeptical that Nic would do it (the song) since he’s gone viral with Fine Apple. When I heard my family singing the hook constantly, I knew the song was special. I was super grateful that he got on it.”

“It has been received really well, especially performing it live!”

“The only drawback of being a part of a huge song like Symphony or Do It Anyway is it raises your expectations. I was hoping this song would take off like those did, but it hasn’t…yet! That’s the cool thing about the music industry now. A song can blow up months after it came out.”

“My strength is live performances, we already have people shouting this song out from the crowd requesting it at shows.”

“I thought of it (the live video) last minute as a way to promote the song outside of artwork and a music video (which Dillon says is on the way). We do all of our own video work in-house. My wife filmed it and our kids interrupted three times…but the fourth time was a charm!”

“I will continue to work this song into my set. I think this song has a timeless feel. It should have some longevity when it comes to performing it live.”

Hit the comments below to let Dillon know how Falling Slow has impacted you! Let’s give one of Christian hip hop’s best his flowers. What is your favorite Dillon Chase song?