He is one of CHH’s super-producers, but he is also one of the most down-to-earth guys you will find

From working with industry legends, to advice for up and comers, to going full-time with his music career, PoetiCS dropped a ton of great info with FiveTwenty.

“It’s been amazing bro. Ever since I took that leap (quitting his 9-5 and doing music full-time) God has opened so many doors left and right. I was nervous about doing it, but it really has been a dream come true man.”

“I developed a group of people that follow me and often buy beats. I give them affordable rates and they come back consistently looks for more. Before I was full-time in music, I worked at Starbucks for about a year and a half. So I was waking up at 3am on the regular. It was brutal, but I knew that God would reward me for my hard work. He did… in bigger ways that I could imagine.”

One of the biggest moments of PoetiCS career to this point had to be producing KJ-52’s newest project ‘What Happened Was…’.

“Yeah man, working with KJ-52 has been a blessing.”

“I’ve been listening to KJ since sixth grade, so working with him has been something great to cross off the bucket list. I had done the song “Savage” off ‘Jonah Pt. 2’ then I also did “Dad Jeans and Ugly Sweaters” off of his Christmas album. So it just came natural to keep working.”

“We had made “Flex” and were starting “Big Enough”, we talked about it and were just like ‘man, we might as well do a project to go with the beat’, so we did.”

“We wanted to work with people we knew were easy to work with and would bring youthful energy to the project. I’m definitely super proud of how it turned out.”

Some of that youth came in PoetiCS main collaborators Xay Hill, as well as Mitch Darrell who was a winner of the bars challenge that KJ issued for a chance to be on the project.

Making a jump in anyone’s career comes with differences and adjustments. What has it been like for PoetiCS?

“I’ve been busier musically, but since I’m full-time now I finally have time to relax when I’m done which is a blessing.”

“I’ve been working with a lot of people [that I’ve created] with for a while like KJ-52, Canon, Derek Minor, but also opened plenty of new doors that I can’t announce yet. But yeah, God has been really stepping in and making leaps in my career. I could never have done it on my own honestly.”

“I’m still very open to working with less established artists. At the same time, if it doesn’t make sense financially, I have to pass. I have rent to pay and I have to keep food in the fridge.”

“I enjoy working with artists who have developed themselves the most. If they have their own brand or signature sound, it makes it so much fun. As long as artists have a small budget, can write and record quality songs, I’m usually open to working with them.”

One of those artists I mentioned already, Xay Hill. The two have developed into one of CHH’s dynamic duos of sorts.

“We originally met when I was prepping for my first produced single. It was “Now They Gone See”. I needed someone who would kill it, so I got Xay Hill to do a verse on it. I hooked him up for a beat on his debut album. I produced the song “The Struggle” ft. J-Phish”

“We just both worked hard.”

“Whenever I needed a verse, or he needed a beat, we were always helping each other. We were also connecting new up and coming artists/producers to each other to work with. But overall, we were just friends man. We spend so much time just checking in on each other, talking about life and stuff. I can say with certainty I can attribute a lot of my successes to my relationship with Xay.”

“Right now I feel like there is a community of people [within CHH] all grinding for each other. I love to see that. There are a lot of people with genuine hearts that want to build with as many people as possible… especially Xay Hill man.”

There is a lot on PoetiCS plate. We have been able to get a glimpse at what is in the works and what perhaps may be on the horizon.

“Right now I’m focusing on married life and working my brand as much as possible. Most of my time is just tryna save money and focus on building my resume. Tryna work with CHH legends and up and comers equally.”

“I’m dropping two singles this month, both with CHH legends. Then, soon after, gonna start the rollout on my album. The goal for me was to combine big names with small names. New up and comers on songs and some huge CHH names on some songs. Putting together some dream collabs I’ve been waiting on my whole life.”

One of those names is Pettidee. The song “Never Die” just released, and you can check it out below. Was PoetiCS able to be successful with the rest of his checklist items?

“I was able to meet those goals!”

“While I can’t give the project title yet, I can tell you it will most likely drop the fourth quarter of this year.”

There is also something unique, and perhaps unexpected, in the works for PoetiCS.

“My good friend Adam and I are working on a gaming channel called Poetics & Pancakes.”

“We are gonna load gaming videos and be doing live streams playing. We’ve been having a lot of fun with that. We are launching on YouTube very soon. Follow my Instagram or my buddy “pringlespancake” to keep updated on new videos coming!”

You know, any time I get an opportunity to chat with someone in the culture I’m looking to get their take on its current state.

What does PoetiCS think about where CHH is currently?

“People are so willing to build.”

“I have tons of CHH cats that are older I have built relationships with. Derek, KJ-52, Pettidee, and I have never had a negative problem with anyone who is older in CHH.”

“There are gonna be the young kids who might be a little more controversial, but they all need to support each other if they really want to make an impact. That’s just my two cents. They just need to keep the unity.”

“From my experience, the only time there is ever a divide is when someone is tryna give constructive criticism and it goes the wrong way.” 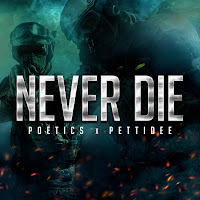