It started with eight nominations for our 2020 Rookie of the Year.

After a fan vote on Twitter, we had three finalists: 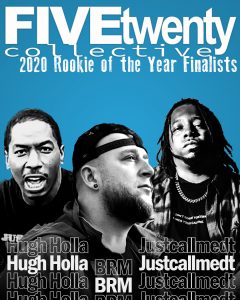 Hugh Holla, BRM, and Justcallmedt have all had amazing years during 2020. They made the final selection process one that was far from easy. It’s safe to say that the future of Christian Hip Hop is in capable hands.

Now, the electoral votes have been cast. The FiveTwenty Collective staff has selected our second annual Rookie of the Year.

Congratulations to Broward’s own Justcallmedt!

With several singles under his belt in 2020, DT turned up this past year.

We were able to talk with DT about 2020 and what it means for him to be the FiveTwenty Collective Rookie of the Year.

“When I first started taking my music career seriously, I was never in it for accolades. I never wanted to be bigger than the message of my music. I wanted the attention on that and God.”

“The thing is, when you hone your craft, you’re consistent and do things in the spirit of Excellence, eventually people notice.”

“I really do take pride in the content I create. I put a lot of thought into what I want to say when I have the listener’s attention. So yeah, given the amount of effort I put into the music, it’s really dope to me that someone would appreciate it and want to recognize me for it.”

“I don’t take it for granted at all!”

What made this year special?

“Ultimately, I set out to keep the momentum going that I created in 2019. That was a breakout year for me musically. I even landed in the conversation for the Rapzilla 2020 Freshman list. Although I didn’t make their final selections, it still had me really inspired.”

“I go from being really motivated to keep pushing to a worldwide pandemic, quarantine, and civil unrest across the country due to racism and police brutality. I was in such a bleak headspace at times.”

“It caused me not to put out any music for eight months. I was in a creative rut. One of the things that helped keep my pen sharp was rap challenges.”

“There was a wave of IG rap challenges as a result of quarantine shutting everything down. I did quite a few of them. It really helped me to find my voice again and tap back into my gift. The one I’m the most proud of is the Rumble Challenge that was started by J. Crum. The message of his song was so on time given the racist actions and statements I was seeing on a daily basis. It pushed me to a new level creatively and I wrote one of the most powerful verses I’ve ever created.”

“Ultimately I won the challenge.”

“After this, I kinda went on a fourth-quarter run.”

“I started releasing music and visuals left and right, starting with Breathe. [After that] Tunnel Remix and 1 am in Broward Freestyle. It really felt like I was on the bench catching my breath until the end of the year.”

“The thing is, God is so faithful.”

“It turned out, my streams and listeners doubled year over year even though I put out less music than the previous year. That was a clear reminder for me that God is in control. Yes, it’s true that faith without works is dead, so we must do the work but ultimately God is in control of the results. My job is to give Him something that He can bless.”

“Honestly, my main goal is consistency.”

“The fact of the matter is, people don’t care how good you are, they care how consistent you are.”

“When your talent/gift is combined with faith and consistency, you eventually become undeniable. It’s hard to ignore someone who is constantly in your face. So yeah, that’s my main goal.”

“As for any other plans for 2021, I’d rather not share that. I’ve learned that it’s much more effective to move in silence, just do the work.”

How about particular collaborations?

“There are quite a few talented artists in our space that I’d love to eventually work with in 2021.”

“I’d definitely say a dream collab would be Derek Minor. I feel like our sounds would mesh well. Plus, he’s one of my biggest inspirations musically.”

“I still feel I have work to do. It’s definitely not something that’s out of reach. I want to continue to put in the work to make a name for myself without a cosign from a larger artist.”

What do new listeners need to know?

“My motivation is when someone tells me how my music positively impacts their life.”

“I always save those messages as a reminder of why I do this.”

“The ultimate goal of my music is to motivate, inspire, encourage, and challenge the listener for the better. I make music for the people who may never step foot in a church or have even been hurt by the church. Although I’m Christian, my music is not overtly gospel, but it’s surely centered in Christ.”

“I believe our lives should be a true testament to the influence and power of God in our hearts.”

“My music is a tool, but my life is the true testimony.”

“Music is the soundtrack of our lives, people should listen to my music to feed their spirit and fuel their passion to achieve their goals. A lot of my hooks are daily mantras. I literally thought about how it would feel for the listener to say the words out loud. Words are powerful and I always want mine to be empowering to those reciting them.”

Drop your words of congrats for Justcallmedt in the comments below!

Also, check out the Sauce playlist on Spotify featuring our new cover artist: 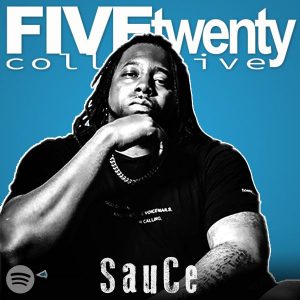 Justcallmedt is a legend who walks among us! His seasoned spirit is the catalyst of the momentum that continously pushes his purpose to the forefront of everything he does. To me, his music speaks for the inner city kids who were raised through adverse experiences often convincing them that God had forgotten about them.
He is Broward Excellence…