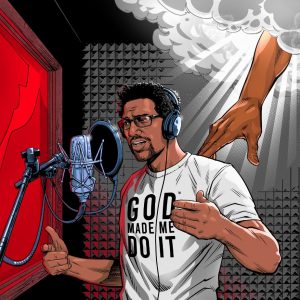 For better and/or for worse, the current CHH scene lacks a plethora of mature voices.

There are so many euphemisms and pop culture references that the Gospel appears indistinguishable from any other message – so basically, the Gospel doesn’t appear, at all.

Such is not the case for veteran Prafit Josiah, who provides, and presents, a much more seasoned approach on his upcoming release entitled GOD Made Me Do It.

The 12-track full-length project features production by Tone Jonez, Dope Boyz Muzic, Sean Ross, and others. It starts by engrossing the listener with the real-life story of news around the passing of Prafit J’s cousin, a “why” for this project.

Come Back encourages the wayward, distant soul to make a return to the created purpose found only in JESUS. The opener features fellow CHH vet R. Swift.

Prafit J is energetic; his delivery is urgent and aggressive. However, it’s on songs like Everyday Wisdom, Imagine GOD, and Dirty Secrets where Prafit J takes a more measured and laid back approach to engage his listener.

Jazzy, melodic production provides the backing for what are a few of the stronger records on the project. J also shows himself a secret comedian with some of the commentary he provides, including the well put together Party Crasher interlude.

This project is definitely for the older crowd, and the Rochester, NY product makes no qualms about choosing not to follow the modern-day soundscape, which means the project has a unique vibe, but also a dated one.

The content covers a varied amount of information and daily scenarios, which reveals a charm to GOD Made Me Do It. That charm, however, is not enough to push Prafit Josiah to the finish line of this part of his race any further.

I’m confident we’ll continue to see both a more polished and rawer Prafit J as he sounds content and driven to continue to release thought-provoking music that benefits from his having a firm foundation in who he is in CHRIST.

Physical copies of the album are available via Prafit Josiah’s website: prafitjosiah.com

For more info on the upcoming release, check out FiveTwenty’s prior coverage here.