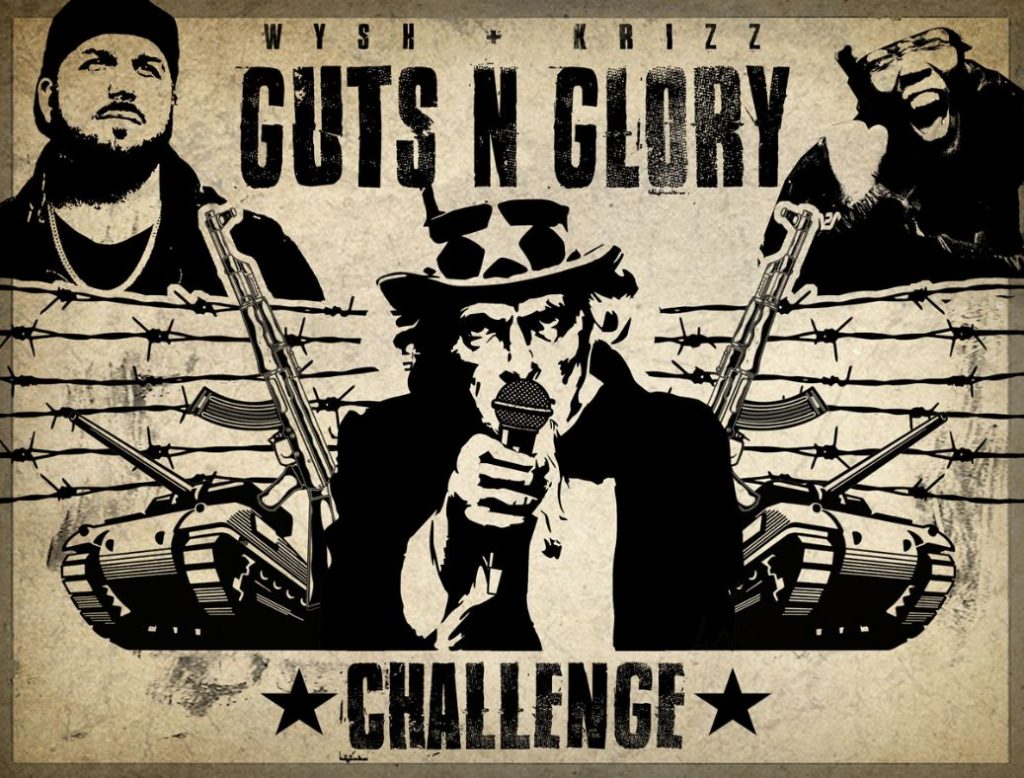 Don’t try to tell me that Christian rap can’t stack up to its mainstream counterpart!

The fallacy is officially over!

Christian Hip Hop artist Alcott recently entered the “Guts N Glory” challenge. What made this challenge different than the countless others the space has seen throughout the years? Not much really.

Oh yeah, except this one was being hosted by Krizz Kaliko!

“I’ve been listening to Krizz Kaliko since I was in middle school, so he’s somebody I’ve always wanted to collab with.” – Alcott

Krizz is an artist that most rap fans are probably familiar with.

Up until recently, he was a longtime staple of independent juggernaut Strange Music (co-owned by hip hop’s most successful independent artist Tech N9ne). Kaliko teamed up with Wyshmaster Beats to conduct this challenge.

Wyshmaster brings his own formidable resume to the table as well.

A multi-platinum producer, Wyshmaster earned a Grammy nomination for the song “I’m On a Boat” by The Lonely Island ft. T-Pain. He also produced the majority of Tech N9ne’s project ‘Asin9ne’.

The challenge required artists to drop a 12 bar verse over a Wyshmaster beat that featured Kaliko on the hook.

“When I saw there was an opportunity to enter a contest where he (Krizz Kaliko) would hear me rap, and then I could potentially win a chance to work with him, I just thought it would be dumb for me not to enter,” explained Alcott. “I definitely didn’t enter with the expectation that I would win. Particularly because I knew there would be hundreds of entries, but I knew that I had to give it a shot.”

After more than 500 entries, the top 4 all received prize packages with the overall winner landing a collaboration on a song with Krizz Kaliko and Wyshmaster.

If you said Alcott…then you probably read the title of this article.

“It’s very encouraging to get that validation. I’ve been rapping for a long time now and I’ve worked extremely hard to get to this point. So getting wins like this means a lot.”

Alcott is not a stranger to rap challenges, entering several over the course of the last few years. To pull out a W in the “Guts N Glory” challenge, however, comes as no small feat. Especially considering the level of respect that Christian rappers routinely get.

“It’s just crazy to see the way God works. It’s a very surreal moment to have one of the rappers I grew up listening to say that I’m dope,” Alcott said. “It’s something that would have seemed impossible just a few years ago.”

“I was initially tempted to do a chopper verse just because Krizz does that a lot and is also associated with Tech. Ultimately, I decided to just do me and not force anything. I ended up submitting a verse with no chopping and it was much more focused on rhyme schemes, with a couple of hard-hitting punchlines.”

“Honestly, I don’t think it’s a huge deal for the space overall. Obviously, it isn’t the first time for a CHH artist to crossover and work with artists in the secular space, nor is it my first time to do it personally. However, I do want to encourage more collaborations between people in the CHH space and secular space.”

“I think it’s an excellent opportunity for us, as Christians, to reach audiences we typically do not have access to. In that sense, I think it’s a positive thing for CHH. It’s not necessarily breaking new ground, but I do think it is a part of a positive trend.”

New Music On the Way

With all of that being said, the ultimate outcome is a collab record with Alcott and Krizz Kaliko, produced by Wyshmaster, is going to be on the way soon!

Make sure to hit the comments below and drop your congrats to Alcott on his win in the “Guts N Glory” challenge. Check out his latest release Reciprocate as well.