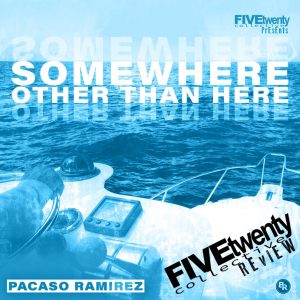 I’m sure you’ve heard and read as I have, how so many have lamented how they feel the year 2020 has been unfair and unrelenting.

Deaths, plagues, lovelessness, and lawlessness have Bible pages playing out on the nightly news.

These generically uncertain times have revealed either fight or flight, feast or famine, passion or apathy. Pacaso Ramirez‘s aptly titled recent release, Somewhere Other Than Here, encourages escaping these times, but not in the manner one would think.

The Project Pluto produced Somewhere is a nine-song project that displays the fierce passion Pacaso is known for.

The backdrop for Pacaso’s aggressive display is Project Pluto tracks that feature a well-balanced mix of live drums and synth sounds that help set the tone for the emotional display.

Pacaso is articulate, deliberately getting his point across on tracks that largely speak to the miss and undereducated.

Hurricane (Just Listen) is a jazzy punch in the throat to kick off this musically mature effort.

Let Us Pray is another standout record, with excellent layered production and, again, Pacaso’s measured approach to engaging his listeners.

Rest assured, this is not a project filled with current sounds and deliveries; the content, however, is present and relatable and easy to digest.

If there’s any area Somewhere is lacking in, it would be in the choruses of some of the songs, where a little more development and imagination could have been added to push certain songs over the top.

Overall, Somewhere Other Than Here is a solid project that is a welcome reflection for the times we’re living in. With sound doctrine and compassionate execution, Pacaso Ramirez has offered us hope in our present chaos.

Now available across all digital platforms. Listen below and hit the comments to let us know what you think!