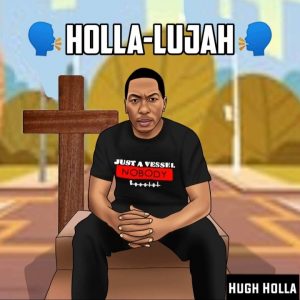 Everybody loves a comeback story.

I mean, even comebacks that aren’t actual comebacks get championed by Hollywood and turned into movies and docuseries. So when it comes to true comeback stories, real second chances that aren’t wasted, the Body of Christ is (and should be) full of these.

Being someone who indulged in music secularly before a true conversion, I thoroughly appreciate GOD flipping the old and making it new and the change is evident.

I don’t know about you, but it can be glaringly apparent when an artist walked out the booth, off the street, into the church, and right back into the booth without taking any time to be taught. This doesn’t sound like Hugh’s story.

Hugh is a lyricist: precise, clear, clean, articulate, witty, all words that come to mind. Punchlines? Check. But Hugh isn’t trying to push “Christian Battle Rap”; not one of his bars is wasted in trying to entertain you.

Holla-Lujah, the title track and opening record, introduces Hugh’s flaw-free flow as he proclaims he’s “…the gospel Rakim on the mic/I follow my Leader…”.

The Tone Jonez produced lead sets the tone for this project admirably.

This project is transparent in what is shared past life experiences and how GOD has pulled Hugh from where he was to where he’s headed. Conversely, songs like Grow encourages the listener to look past where they’ve been to get to where GOD purposed them to go.

Features on this project include TC the Collector, Zach Menshouse, and Kalom Montgomery, all well done, but Hugh still shines alongside.

Slippin’, with the sampled choir in the background, moves and grooves and is easily a standout and viable crossover record that showcases Hugh’s ability to ride the track and deliver differently with the same results. Hugh gives you just enough, not too much, never too little, just right.

The one Achilles heel to this offering is the mix and master.

The post-production is unimaginative for a project of this lyrical caliber. Hugh Holla is a gem with a clean flow and sound doctrine (that matters!!!) who’s got a whole lot in the tank and Holla-Lujah, despite its challenges, is a great first swing. Genuinely looking forward to more growth and the music the results.

Now available across digital platforms. Listen below and let us know what your thoughts are in the comments!