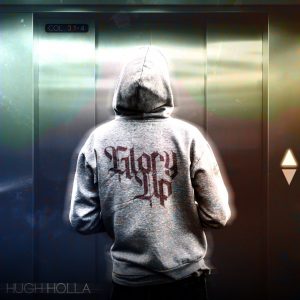 Many would argue that the current wave of CHH artists has lost their intentionality in pushing a Gospel-centered message. Perhaps in over-the-top attempts to be relevant, cool, and ingratiating to one’s audience.

Hugh Holla is not one you’ll find falling into that category.

His latest release, Glory Up, is further evidence of that.

Making his official splash onto the Christian hip hop scene with his 2020 Holla-Luja project, which garnered him well-deserved attention and recognition, Hugh continues to solidify himself as a consistent force in the genre.

The seven-song EP has a mixtape feel to it. That may have been the idea all along.

Holla is far from gimmicky. His flow is ice cold and his delivery deliberate, as if his faith has him unbothered on all fronts. His lyrics can’t help but convey that peace and staunch standing.

Tracks like Testaments, one of the project’s stronger records, make Hugh’s message and mission statement clear with bars like “I could ramble through some bars and tickle your thoughts/I’d rather help you water your heart and harvest the crops.”

Other stand-out records like Rooted and Untouchable offer more of the same gritty address and witty approach, that while are absent of any fluff, don’t waste any of the well-placed punchlines littered throughout.

Glory Up is refreshing for those who are looking for a pure Gospel message with a truly urban feel and relatable message. That doesn’t mean the project is without its flaws.

While the production is consistent and serviceable, it’s not spectacular. That goes back to the mixtape feel point made earlier.

The hooks and choruses are somewhat predictable, a bit time-stamped, but not detracting from the message of each song and the project as a whole. There is growth in this project and no apparent throwaway songwriting present.

Glory Up is a jewel, flaws and all.

Hugh Holla is so confident in his belief that the pointedness of this offering overcomes any technical or style issues that could be addressed. As stated, this is not a modern, current attempt to bring a relevant sound to the masses. This is an execution in delivering an authentic Christian message with a beat backdrop that doesn’t allow you to miss the intent of its content. Mission accomplished!

Let us know in the comments how you feel about Glory Up by Hugh Holla. Do you agree with this assessment? Which songs are standouts and which are lacking? #SoundOff