Home Music Reviews Review: DJLC, ‘My Destiny’s In Him’ @DJLC_LMG 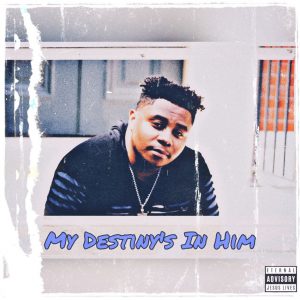 A friend of mine, who happens to be a CHH artist, told me that he was working on some new music with some talented people he recently met up with.

Then he told me I should review a new project from one of these individuals.

The project he sent my way is My Destiny’s In Him by DJLC of Like Minded Gang.  The unknown to me artist out of Delaware gives me an opportunity that I don’t get very often. Typically I’m somewhat familiar with the music I review. Either I’ve heard the artist’s prior work or I sample the drop before deciding to write out a review.

This time, I’m going to do an instant reaction as I listen through the 8-track album. Here we go!

Old Me: The opening track begins with a prayer of thankfulness before giving way to the first bars of the album. “Old Me” has a throwback feel to it due to its lyrical focus. I will say, the echo/reverb effect on the hook took away from the listening experience for me. Even so, the overall message of the first track is relevant and easy to connect with. Not a bad way to start off, let’s see what track two has in store.

Legendary: Again, some of the vocal effect choices maybe should have been rethought here. Regardless, there is no denying DJLC’s pen game. My guy can craft a verse that flows well while having depth. On “Legendary”, LC compares the choices of living a life for Christ…or not. Are you dead in the ground or experiencing all of God’s promise?

Rocking – ft. Vintage: On “Rocking” we get one of three features from Vintage (the only features on the project).  With a vocal reminiscent of Xay Hill, the energy is taken up a notch here. We don’t get the first bars until halfway through the track which unfortunately feels a little too long for me. Also, there is a questionable part of the hook that had me wondering if I was hearing what I thought I heard.

Juice Flow – ft. Vintage: From the jump, the production on “Juice Flow” has a different feel than what has been featured to this point of the project. This is easily the best offering from an engineering standpoint so far. The sing-songy vocals come across as easy and comfortable with a catchy melody. Certainly the standout song as of now.

G.O.D Squad: The production switches up with “G.O.D Squad”. DJLC takes his stab at creating a hyphy anthem here. I think, with improved engineering, there is a lot of potential with this track. I would love to see what a more seasoned engineer could do to really give the song more polish.

Unashamed: Again, we have a track with a lot of potential on “Unashamed”. It would be nice to hear DJLC experiment more with his cadences to help improve the movement of the vocal. Unfortunately, as is, the vocal runs together for the most part throughout the song. You can definitely hear what is waiting beneath the surface though. I think as DJLC continues to develop and perfect his artistry, there will be plenty to be excited about.

He Be Working – ft. Vintage: Love the focus of “He Be Working”. So often in hip hop, we hear about the grind that artists are on, but how do we overlook the work that God the creator continuously puts in on our behalf? There are some nice switch-ups here that increases the level of the track. Easily a top track along with “Juice Flow”, but there is still one more to go.

Vibe Check: The vibe, call it a pun if you want, comes back down on the finale, “Vibe Check”. DJLC asks the listener to “tell me what’s the vibe now” perhaps in a tongue-in-cheek fashion. For many artists, this appears to be life’s motto as they would rather replicate the newest trend rather than forge their own lane. One thing that is easily noticeable on ‘My Destiny’s In Him’ is that DJLC has a goal of crafting “his sound”. I think he’s finding it as well.

Overall, I would say that My Destiny’s In Him is an average project.

There is plenty of potential that dwells within its 23-minute run time. DJLC writes well and understands how to excel from a lyrical perspective. The album also remained pretty cohesive from start to finish (not something every artist is capable of).

It certainly had its opportunities as well. The biggest being engineering.

Finding a good audio engineer to work with who can bring the most out of your music can be tricky. But mixing and mastering can make or break even the greatest of song concepts. My best piece of advice for DJLC would be to find that individual that can take who you are as a person and bring that to life in your songs.

While there are some areas that need some more work, nothing about this project makes me hesitate to check out what DJLC and Like Minded Gang have in store for the future. In fact, I’m actually looking forward to what’s next because of the potential that already exists.

Check out My Destiny’s In Him and hit the comments below. What are your thoughts on the album? How about your favorite tracks? Disagree with my take? Let me know that as well!