This music seems to just come easy to Lank.

Okay, for starters this is not my typical review. As a matter of fact, I’m thinking this will be the first in a new series of “reviews” for me. One where I simply give my thoughts on projects of my choosing.

Typically I do a breakdown of each track, but these are projects I’ve enjoyed that I want to make sure you are aware of. So you’re getting my general overview.

When Lank announced his newest project, The Frustrated Producer, I had a feeling that it would make its way onto my list. Here we are.

Big Lank may not be your typical CHH artist, and that is okay. He describes himself as “just an average joe that loves Jesus!” Honestly, that is more than good enough for me. I think that is part of the appeal to the music. On his second album, Lank keeps moving within the lane that more than suits his gifts.

With this project, Lank is sharing his journey as a producer.

“It is an audio movie, you would have to listen to it start to finish to grasp it.” – Lank

Working on a Beat Intro sets a nice starting point for the project as Lank works his way through composing a beat. It is a candid look into the thought process, the highs and lows, that producers experience.

From here, The Frustrated Producer only continues its ascent.

The feel of the album is consistent and smooth. As I said at the beginning, music comes across as natural as breathing for Lank.

Lank has a sound that fits into the modern soundscape while throwing it back to classic hip hop. Whether it is the focus on lyricism, the cadences, or adding just the right elements – it is almost unfair. Unfair for other artists that Lank is this good and unfair that he is not popping on a bigger scale. I think the latter is simply a matter of time.

One thing that adds to the “audio movie” aspect of the album is the carefully constructed skits, something that has tied together every classic album that I can think of. This is an element that not everyone gets right.

For Lank, he knew the story he wanted to tell and his skits help develop the depth and detail for the listener.

A prime example is the lead into the track Second Guessin’ Myself, which is a standout track on the project. The flow pattern blends perfectly with the melody as Lank vents his frustration with artists looking for producers to “hook them up” with discount beats. Which typically means of the $Free.99 variety.

I’m guessing every producer has a Larry or two in their life.

Sometimes you have to exercise both the demons and the leeches. Peep the track Support and you’ll understand. It is a great message of why it okay to be selfish in the right situations. Sometimes you simply have to focus on your best interests or no one will. However, don’t lose compassion for those who truly need it.

Jay Atoms delivers a fantastic feature on the track Got It Like That, a song that calls out rappers who are faking the life they’re living as they try to generate streams. 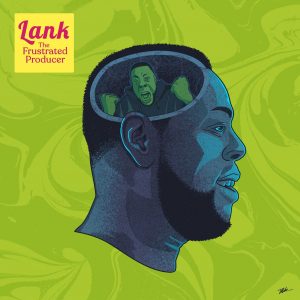 The run of tracks three through five is a truly great one.

While The Frustrated Producer is not what one would consider Christ-centric, that doesn’t mean that Lank’s faith is absent.

Here’s the skinny, even creatives who are believers struggle with insecurity, anxiety, and more. It’s not always something that gets discussed though. That is why I can appreciate an album like this. As the track Doubt reminds, “God gave you them abilities to go out and flex them”. Lank is pushing a conversation that needs to be had while not losing sight of what is truly important.

This was a great Q4 release and a welcomed way to end the crazy year that has been 2020.

Mayne….
I am in awe and shocked on the reception of my “The Frustrated Producer” album. I’m honored for any one to even take their time out to peep it. It has the same format of my “The Process In The Progress” album where it’s an audio movie but they have 2 different purposes.

Have you checked out Lank’s The Frustrated Producer?

Drop your thoughts in the comments below! Where do you rank it among this year’s releases?