Home Articles The DIVE Series: Ty Brasel, “SET IT OFF” 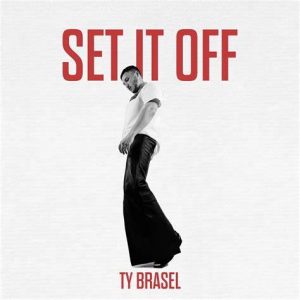 Welcome to the eighth installment of The DIVE Series*. I am your host, DJ Expander. If you are new to this series, thank you for tuning in! I appreciate you all, from new readers to consistent readers of this series.

Later this month, on the 20th, I will drop an article about the entirety of Ty Brasel’s most recent album, TRANSCENDENT. So, stay tuned!

“But though we had already suffered and been shamefully treated at Philippi, as you know, we had boldness in our God to declare to you the Gospel of God in the midst of much conflict.” ‭‭- 1 Thessalonians 2:2‭

Ty Brasel‘s follow-up single for his TRANSCENDENT album, SET IT OFF, was released on July 1st, 2022. The track’s production is by Juice Bangers and Dirty Rice. Ty Brasel wrote the song’s Chorus with Kenneth Christian Kacey (Dirty Rice) and William Josiah Howard Reeves.

I will now extract the most critical content of this track and make it as easy to understand as possible.

The intro of this track is straightforward and leads into the Chorus of the song, which is as follows:

Firstly, we must understand the phrase’s meaning in this track’s title and know how it likely relates to Ty Brasel. The term “set it off” (or “set this thing off”) primarily means boldly and passionately doing something major or significant.

In Ty Brasel’s case, being a Christian and a Hip Hop artist, this most likely means that he will boldly speak the truth of Christ to his audience and perform on stage with considerable passion and respect.

As seen in the Verse of the Day for today’s article, The Holy Spirit, in every follower of Jesus Christ, encourages believers to proclaim the Gospel boldly without fear of conflict.

Ty beautifully portrays this in the first verse of the song:

“I just pulled up in the brand new Yeezys. I rock the Ye with my Jesus pieces. Sitting in Sunday service, ultra beaming. Lil’ heathen came a long way from dreaming. See what I seen, gotta see to believe it. Nightmares and ecstasy, I done seen it. Satan sayin’ curses, speaking the evil. Angels watching over take me to Eden (Yeah). With my head to the sky. Look around, see the stars align. All the times almost lost my life. Too alive that you can’t kill my vibe. Made it through the storm and tribulation. Made a legend, history in the making. Pull up, I’m raging, made it out. Now it’s off to the races.”

These first sixteen bars were a great way to start this track.

In this first verse, Ty is expressing:

The Chorus repeats for a second time, and then we hear the track’s second verse:

“Young Ty man back with the real rap. Not with the riffraff, not with the witchcraft. If you was wondering where I been at. I was chilling, kicking game at the kickback. They talking down, I don’t feel that. You can find me where the real at. I’m on the go, moving real fast. Took off so quick caught whiplash. In the script with a sixth sense. Seconds from seeing death win. Second chances just sets in, yeah. I got a second wind. ‘Fore I die, I gotta make a impact. Owe it to God, I got a sick past. I feel like Ye when the whip crashed. Made it through the wire, now when I look back. Out of the dirt was crystals. I saw the light, it’s blissful. I made it out of the pitfall. Now I gotta set this thing off.”

In this verse, he indicates that he is an artist all about creating real rap that does not conform to the ways of this world (examples being riffraff and witchcraft). Ty talks about how he was at a kickback (small party) with nice shoes (kick game). The rapper also mentions how he prefers to hang out with genuine people since you are the sum of who you hang around.

He says he owes it to God to positively impact people, especially since he (like all of us) has a sick and sinful past. He considers himself saved thanks to God’s everlasting love and Jesus’ sacrifice for our sins. Now that Ty made it out of his previous pitfalls, he wants to make a positive difference in people’s lives. He aims to make a difference with Christ’s love in his heart and the guidance of the Holy Spirit. All by boldly proclaiming the Gospel of Jesus Christ.

The Chorus runs one last time, and then the song ends.

SET IT OFF is a track created by Ty Brasel, with the production credits going to Dirty Rice and Juice Bangers. Today, this record had over 147 thousand streams on Spotify, making it the second most listened-to track on Ty’s album TRANSCENDENT on Spotify just behind GOD IS THE BEST (the lead single for the album) featuring 1K Phew.

Based on the given information, Ty Brasel’s primary point he is attempting to convey is likely the following:

He has made it through his tribulations and has salvation in Christ because of God’s amazing grace and because he dedicated himself to making a positive difference in the lives of his audience by boldly proclaiming the Gospel without fear of rejection or persecution.

As mentioned in today’s Verse of the Day, 1 Thessalonians 2:2, “But though we had already suffered and been shamefully treated at Philippi, as you know, we had boldness in our God to declare to you the Gospel of God in the midst of much conflict.”

It is very important for Ty Brasel to make a positive difference in his audience’s lives. He aims to make a big difference by using his sinful past as part of his testimony and boldly proclaiming the Gospel of Jesus to help lead others to God.

In the same way, it is of the utmost importance for followers of Jesus to stay rooted in God’s Word and prayer, guided by the Holy Spirit, and bold in our sharing of the Gospel no matter how bad the persecution might be. As emphasized in this single, Christians should be courageous in making a significant positive impact on others with the Gospel, our testimony, and God’s love in our hearts.

**See the full SET IT OFF music video at the end of the article!**

Want more content from The DIVE Series? Check out the previous article now!

--
Purchase* Set It Off and support Ty Brasel!